26.04.2016
26.04.2016
The world's most award-winning river cruise line, Viking Cruises, had first announced its new ocean cruise line product in 2013 and began sailing its first vessel, Viking Star, in 2015. Now, its’ one year old vessel is joined by a sister ship, the Viking Sea which just made it shakedown cruise to Zadar and Dubrovnik!
We were honored to have had the opportunity to host the esteemed guests aboard the Viking Sea in the Croatian ports. Among them, many friends and colleagues of the Viking Sea corporation and the CEO, Mr. Torstein Hagen.
The Viking Sea docked in Zadar on March 26th, for half a day. Adriatic DMC organized and managed a central Viking Information Point in Zadar where our experienced guides were able to inform the guests about local tourist attractions, museum, restaurants and other points of interests. Additionally, we had organized a choice of three different land excursions for the Viking Sea’s extinguished guests to choose from:
On April 10th, the Viking Sea sailed into Dubrovnik, where the vessel docked for half a day. To make the most out of the guests’ time in port, we organized a guided city tour of the UNESCO site, Old Town Dubrovnik.
The Viking Sea is a smaller vessel compared to some known ocean cruise brands, that was designed to focus on the destination much more than was previously possible due to the ship size. This transcended directly into more time in ports, allowing for more diverse and experiential port excursions.
Overall the ship sports a modern design, specious rooms with balconies offering incredible views. 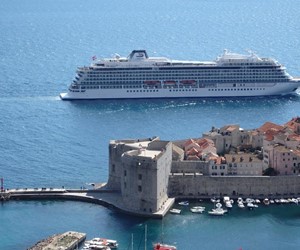 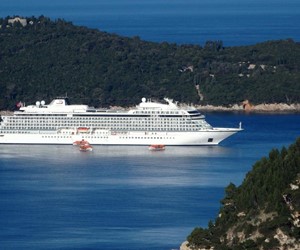